When many hear the word Blockchain, they think immediately of Bitcoin and other cryptocurrencies. This is an unfortunate mistake. You can classify types of Blockchains across two dimensions: 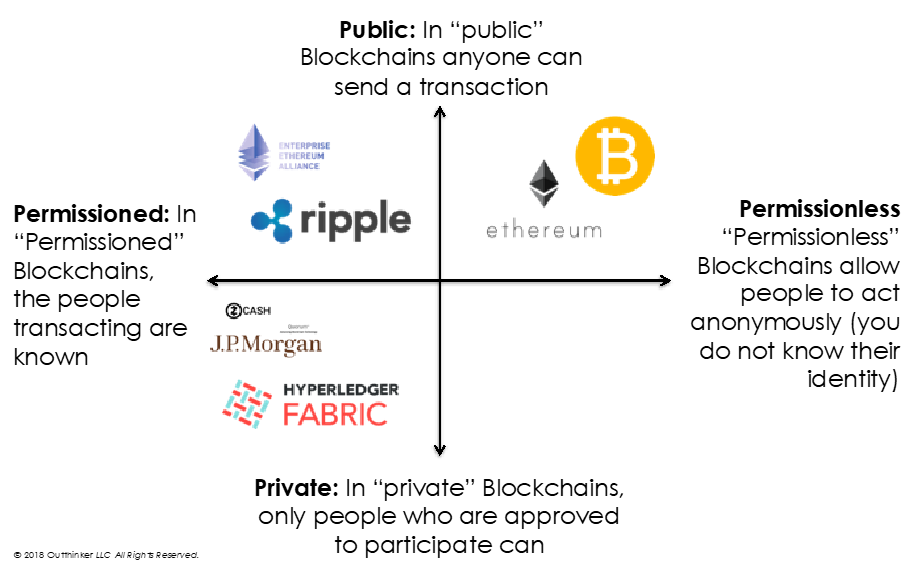 In our past blog post, we likened Blockchain to Google Docs, in which one document “in the sky” is altered in real time by multiple people. Taking that analogy one step further, we could say that in a public Google Doc, anyone would be allowed to make changes, while in a private set-up, only those you invite can edit. In a permissionless document, people could make changes without your knowing who made those changes, while in a permissioned document, you would see the names of each person who made each edit.

Cryptocurrencies, such as Bitcoin and Ethereum, are well-known examples of “permissionless, public” Blockchains. They are like the “Wild West” in which anyone can send a transaction anonymously. This kind of Blockchain network is what Blockchain was originally designed as. The creator of Blockchain, a person or group working under the moniker Satoshi Nakamoto, designed Blockchain to liberate people from formal currencies controlled by central banks.

But such cryptocurrencies have also facilitated fraud. Many of the ransomware incidents that have made headlines were facilitated by the fact that perpetrators could accept payment anonymously, with no traceable bills or electronic fingerprints to follow. Also, as the price of one Bitcoin rose to $1,000 and even $20,000, it became nearly useless as a currency for payments. How many things can you buy in increments of $20,000?

For these reasons, some people consider cryptocurrencies a failure.

Now, sitting at the other extreme of such “Wild West” Blockchain networks, you will find “permissioned, private” networks. In this model, only trusted participants may transact, and their identities are known. In other words, only people that are invited into the club are allowed to transact with others, and when you transact with someone, you know who they are.

Such “permissioned, private” networks have one powerful advantage: Since they don’t require “mining” (see “What is mining?” below), the cost to clear a transaction is much lower. This is a big deal, because the adoption of Blockchain hinges on whether transacting on it costs less than the cost of transacting using the current standard multiple-ledger system.

It is this form of Blockchain that is taking hold within industries: groups of industry players, coming together, to create Blockchain-enabled networks that increase the efficiency of the entire industry. Examples include Enterprise Ethereum Alliance, Quorum by JP Morgan, and Hyperledger Fabric.

When two people engage in a transaction, a third person (or people) does the “witnessing”. They validate the transaction. In a permissionless, public network, the person doing the witnessing needs to get paid for that work. That is called mining, an incentive to participate to keep the network honest. In a permissioned network, one needs no mining because the cost of “witnessing” is less because participants have an innate incentive for the network to work.