Pizza Wars: A Case for Proximity

Every weekend, like most busy parents, I do my best to convince my three children to come out of their rooms, put down their phones, and spend some time with their dad. Sharing a meal is the best way to bring us together, and an abundance of delivery options lets us capitalize on the time spent at home instead of driving through traffic.

My kids’ moods and preferences dictate our order, but for many Americans, Saturday night usually means one option—pizza night. And the restaurants who win the race to our plates are those who can deliver what we want as fast as we want it. The history of a longstanding pizza war shows this to be the case.

Through the 1990s, Pizza Hut was known for its product innovation efforts. With consistent new releases like Stuffed Crust Pizza and the Big New Yorker, the chain stayed top of mind and market. But in the past decade, a rival has taken over. After a shift in its strategy, Domino’s gained a clear lead. What did the pizza franchise do differently to increase its stock price by about 1,600% in the last decade? The answer comes down to proximity.

If you’ve been following the Outthinker trend reports this year, you’ve heard mention of proximity. My friend and collaborator Rob Wolcott coined the term, and I’m co-writing a book with him on the topic.

Building proximity into your strategy means bringing the production and provision of goods and services closer to the point that customers demand them in time and space. New technologies—digital platforms, high-speed communications, AI and automation, additive manufacturing, IoT, etc.—are propelling us toward a future where Proximity (P)=0.

And what better demonstration of the human drive for instant gratification than pizza delivery?

Domino’s vs. Pizza Hut: a history

Up until 1945, few people in the United States were familiar with pizza. But when soldiers returning from World War II developed a craving for the dish they’d tasted abroad, the trend exploded. By the 1960s pizza was here to stay, and two household names had opened that would dominate the fast-food pizza market for the decades to come: Domino’s and Pizza Hut.

Pizza Hut entered the scene in 1958, followed by Domino’s in 1960. Throughout the decade, pizza delivery was popularized. More Americans purchased their own vehicles thus initiating the rise of fast-food chains and their ability to hire delivery drivers. In the 60s, pizza delivery in 30 minutes or less became an industry standard.

With stellar marketing and innovative products, Pizza Hut would maintain its hold until the 2000s, when Domino’s began a proximity shift that would raise its stock above Amazon-ian levels and help it remain rock solid through COVID disruptions. While Pizza Hut was the first to introduce online ordering, an upset was around the corner. 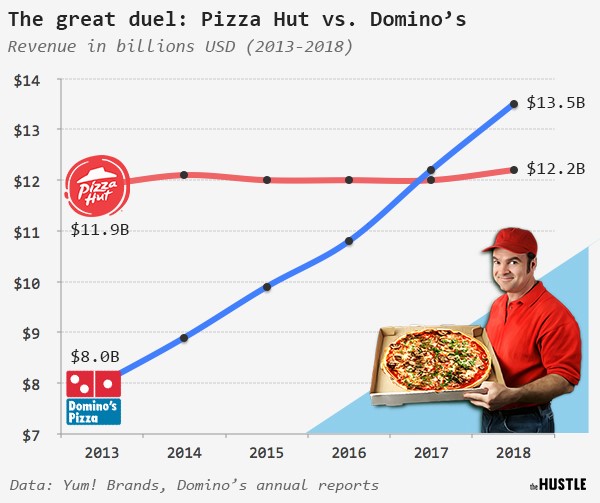 Image from The Hustle

Domino’s leadership realized that it could deliver more value to customers than just the right pizza in under 30 minutes. The company rolled out its own online ordering in 2007, and in 2008 launched the Domino’s Tracker—customers would know exactly when their pizza entered the oven and how long it would take to appear at their door. In 2011, CEO Patrick Doyle asked his team to make it possible for a customer to order in 17 seconds—the amount of time it takes for a stoplight to turn green.

The best strategists know that getting ahead of the competition often results from getting clear on what business you’re really in. Dennis Maloney, Domino’s senior vice president – chief innovation officer, explained how Domino’s shifted from purely a pizza chain to a reputable tech innovator: “We’re starting to think of ourselves as an e-commerce company that sells pizza.”

With a new definition, Domino’s gave itself permission to think outside the pizza box.

In 2019, Domino’s opened its innovation lab in Ann Arbor, MI. Many of the innovation decisions that have brought Domino’s success point to proximity—preparing and delivering pizza closer to when and where customers want it.

CFO Stu Levy remarks, “How do you provide great service? By getting as close as you can to the customer.”

A key strategic concept that the company plans to help it maintain its lead is fortressing, or opening several locations in the same area to keep other entrants out. It’s proven to reduce delivery times and lower costs.

Today, through its Anyware technology, Domino’s customers can order via Amazon Echo, Apple Watch, Facebook Messenger, and Google to pick up in stores or receive delivery to their homes. The company has invested in GPS tracking, deliveries via drones and e-bikes, and a partnership with robotics company Nuro, to deliver using autonomous vehicles. Self-driving cars are already delivering Domino’s pizzas in Texas. Smart freezers in Domino’s kitchens help identify equipment malfunctions and prevent waste.

Let’s look at how Domino’s embodies some of the key characteristics of proximity companies.

They organize around what customers want
The chart below shows how Domino’s moves pizza enjoyment closer to the customer. Point A represents picking up a pizza—based on driving distance and time, it’s pretty far away in terms of proximity. Point B occurs when pizza is delivered to the home, which both Domino’s and Pizza Hut sped up via online ordering. Point C is a new level after Domino’s Tracker was introduced—C* reflects the psychological reassurance of knowing when your pizza will arrive. 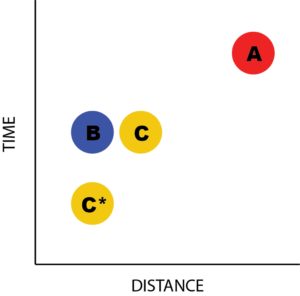 They violate traditional constraints
By thinking of itself as an e-commerce company, rather than a pizza company, Domino’s changed its innovation outlook and its mindset toward taking risks and failing fast.

They build presence before markets have been clearly defined
Before driverless cars have hit the mainstream, Domino’s slipped ahead of the competition by investing in autonomous vehicle preparation and delivery. The company has also entered the worlds of virtual and augmented reality with a partnership in the video game series Crash Bandicoot. Domino’s “the Noid” character will appear and players will have access to pizza-themed skins.

They adapt as conditions change
The pandemic showed how quickly Domino’s was able to adapt—contactless carryout allowed drivers to wait in their vehicles when picking up a pizza.

They’re designed with ecosystems in mind
Many of Domino’s innovation efforts could not be possible without a strong ecosystem. Partnerships with data management platforms, robotics companies, and communications providers all facilitate a seamless and proximity-driven delivery experience. Forbes suggests that Domino’s survival in the future will rely on its ability to form food delivery ecosystems with unlikely partners.

The Future of Pizza 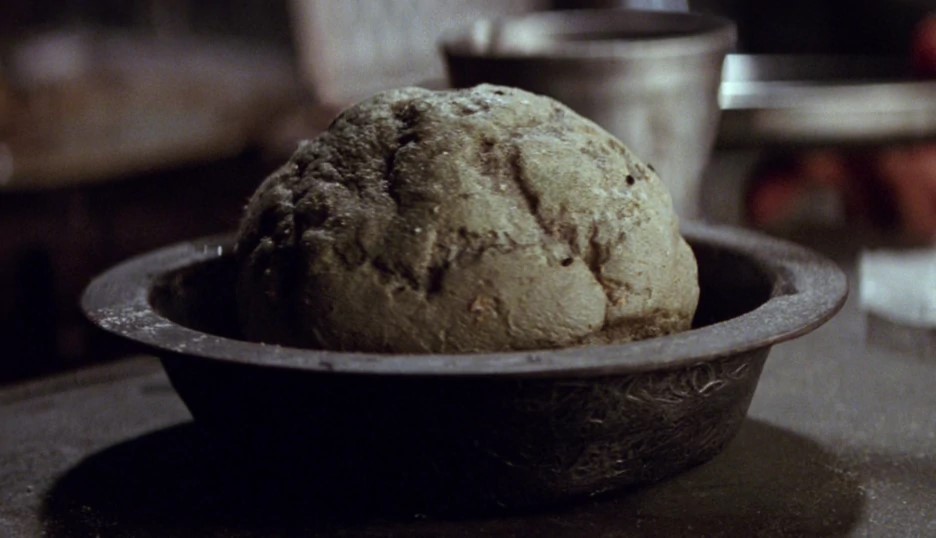 Star Wars fans will recognize the above image as Rey’s portion bread, the self-rising bread made instantly by combining polystarch flour with water. It turns out, we are not so far from bringing instant meals into our homes.

Futurist Tom Cheesewright foreshadows that pizza ingredients will look quite different, topped with lab-grown meats and cheeses or greens grown in vertical farms. It might even be “3D printed by a robot chef and then carefully charred around the edges by a laser grill.”

In 2017 a bot from BeeHex, funded by a grant from NASA, demonstrated the ability to 3D print custom pizzas in six minutes. Seattle tech startup Picnic showed that it could make 300 pizzas with only 1% waste in under an hour. Pizza Hut is looking to make its way back with a robotic delivery truck that bakes pizzas en route; its partnership with Toyota, Amazon, and Mazda plans to focus on driverless technology and mobility as a service.

The future of pizza is already here, and it has a lot of fun and funky innovations in store. Families of the future won’t need a Slice Slapper to pick off their toppings—each family member may be able to 3D print their own slice. But in the fast-food pizza industry, like so many others, the root of innovation success will depend on proximity—who can produce and deliver what consumers want, when and where they want it.